Michael Gross was a middle school teacher on Long Island and in 2019, right before the pandemic, he retired. He always loved mentoring and was passionate about running and triathlons. In 2016 he became certified with USA Triathlon as a Level 1 coach.

“For a while, I worked at the Y until the pandemic,” Michael told me, “I would work with members and do pool, strength, and cycling workouts.”

This year, he opened the doors to his triathlon coaching company called Advanced Multisport.

He told me that in 2000 he started running for the first time in his life and in 2001, he ran his first marathon. Since then, he has run 22 marathons. “On my 17th marathon, I had a PR,” he said. “That was the same year I turned 49.” The marathon was held in Pennsylvania.

In 2006, he was cross-training due to an injury. He was swimming and cycling. But it wasn’t until 2012 that he competed in his first triathlon. “That year I competed in two Olympics and a half Ironman,” he said. 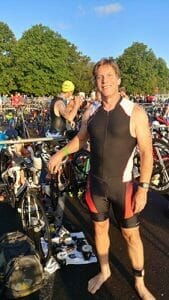 Were you athletic growing up?

“I never participated in team sports but I did play volleyball with friends. I also ran track in middle school and played racketball and tennis,” he said.

What was your greatest achievement?

He told me that in 2021 he trained hard and during his 70.3 in Maryland, his time was within one minute of his expectations.

Michael Gross told me he plans on competing in IMAZ, a Half in Lake George in the fall, and on August 7 he plans on doing Steelman Racing.

Faces of Triathlon is a new column I am doing as part of the blog. If you would like to be featured, please reach out to me at [email protected]