When my kids got older, I got back into running and started swimming laps at the local pool for low-impact cross-training.  As I started swimming more, my confidence grew, and I thought about doing triathlons as a way to branch out.  Triathlons meant learning how to swim in open water which, as any triathlete knows, is completely different than doing laps in a pool.

The water in a bay or pond can be murky making you instantly suspicious of anything your feet or hands touch as you cautiously make your way in this new environment.  But after a while, most swimmers start to prefer open water to pools.  Every day is different when you’re outside and, while conditions may not always be perfect, swimming during a beautiful sunrise or sunset makes up for the occasional bad day.

After doing a few triathlons, I started adding new types of events to my calendar, one of which was going to Orlando to participate in Lucky’s Lake Swim.  I go to Orlando regularly to visit my kids and grandkids and had made several trips for the morning swim Lucky Meisenheimer holds six days a week at his lakeside house. If you are in the area, I would highly recommend going there.  I knew Lucky held several events throughout the year in addition to the morning swims and decided the time was right to take the figurative and literal plunge. 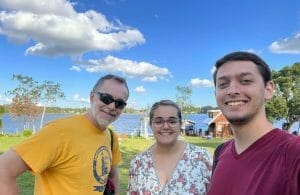 One of these events is the Frogman Night Ops 5k Swim.  The proceeds benefit the Navy Seal Foundation which helps disabled veterans and their families.  The event starts just before sunset and ends in the dark as the Navy Seals are known for doing night operations.  Sounds like the perfect event if you are looking for an adventure.  Because it is a night swim for charity, there are no times recorded with the emphasis on safety and just having fun.  You can go for the complete 5K or only a couple of laps if you want.  Everyone participating must swim with a float with a flashlight inside.  Once it gets dark, the lighted floats on the water look like a bunch of fireflies going for a swim.

While I didn’t have to go the full 5K distance, it’s a goal I wanted to complete having never gone that far in a single session.  Swimming at night, also a first, made it all the more challenging.  The course is 500 meters from Lucky’s dock to one on the opposite side of the lake and 500 meters back.  Five total loops added up to 5k.

The event started about 25 minutes before sunset so the first couple of laps were still in daylight.  Since it wasn’t a race, my mantra was to focus on breathing easily and maintaining an all-day pace.  After two full laps, darkness set in and the swim got really interesting.

Open water swimming is always a challenge especially the act of sighting as you try to keep track of landmarks and do your best to swim in a straight line.  Swimming at night ups the challenge even more.  While the course buoys had lights on them, it was hard to pick them out among all the lights around the lake coming from the houses and docks.

I found it easier following the swimmers around me and their lighted floats.  My favorites were a woman who brought a huge unicorn-shaped pool float and a guy with a blinking yellow and red float that was easy to see.

Despite the lights, swimming at night was still a challenge as there were about 50 participants stretched out over 1,000 meters.  Sometimes you had swimmers close by and you could use them as guides (hopefully they knew where they were going).  Other times you felt alone in the darkness without other swimmers around you.

At night, missing the visual cues you have in the day, I became much more aware of my breathing and how my body moved through the water.  A little anxiety also set in as I wondered if I could finish the entire 5K before the cutoff.  While I didn’t look at the sky often, I occasionally saw lights moving through the sky and realized they were planes flying to and from Orlando International Airport.

With 1,00 meters to go, I realized I would make the cutoff easily and started to relax.  I saw a blinking light guy on my last outward bound lap and started to follow him.  He was a faster swimmer than me, so he pulled away and I lost him in the distance.  Fortunately, he rested at the turn, and I caught up to him for the final stretch home.  This time I wasn’t going to let him go and picked up my pace so I could stay right behind.  The feeling was just like a long road race when you’re in that final stretch before the finish line and the random person running next to you is the one you’ve decided you just have to beat. 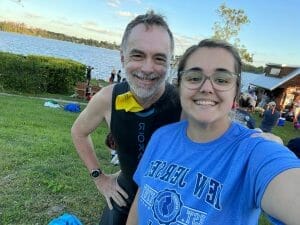 After pulling into Lucky’s dock, I thanked the blinking light guy for being a great guide and made a mental note to find a similar light for my next night’s swim.

Finishing any challenging event for the first time is exhilarating and this one was no different.  It was even more so because my youngest daughter and her fiancé came to watch even though they had to put up with a plague of flies that were bothering the friends and families of the swimmers.

Comparing to a Half Marathon

I finished in just under two hours, so I mentally started comparing it to events of similar duration, most notably half marathons.  It wasn’t a perfect comparison because the goal of this swim was just to finish, not to race, but any two-hour run, even at an easy pace, leaves my legs sore for the afternoon and a half marathon race will leave me sore for a couple of days.

Swimming 5K left me feeling surprisingly good, if tired.  I didn’t realize how tired I was until I had dinner with my daughter and her fiancé and nearly fell asleep in the car while being driven home.  All in all, this event was one I would readily sign up for again.  How much you want to swim is completely up to you, the cause is a good one and it is probably different than anything else you’ve done before!