I arrived in Fort Lauderdale on Wednesday to help my dad. While down there from New York, I decided to sign up for a triathlon. I knew I needed to come in March and the timing worked out perfect for the Las Olas Triathlon.

Here’s a personal race review of the weekend’s events.

Check in on Saturday was a breeze. I was greeted by cheerful volunteers and handed my number. I was also told to leave my bike in transition. I was happy to leave it there overnight and not have to de 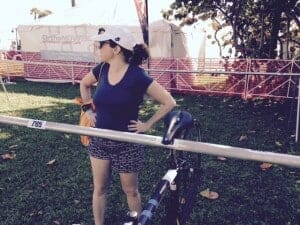 al with it the next day.

I rented a bike from Bike America in Coral Springs. They rented me a Specialized Ruby that was really smooth to ride. 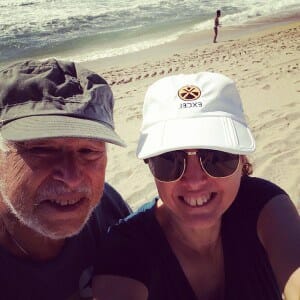 The expo on Saturday was smaller than I imagined. They had a couple of vendors including City Bike and the Ft Lauderdale Tri Club. Everyone was very nice but I had hoped for a bigger show. (I love walking around these niche shows.)

Arriving at the race

The next day, I arrived at 6 am on the dot. Transition opened at 6 and people were already checked in. There was a huge line to get into transition.

“Body markings only,” the woman screamed in my ear. I found out where body markings were taking place and it was such a long line. I was there with my Dad. I told him to take a seat, that it would be a while. The line was over a block long!

I stood and I spoke with the people around me. Everyone was very friendly, although not happy with the disorganization of the race. I heard through the grapevines that they expected less people and didn’t have enough volunteers for all the people participating.

The line actually went faster than I had thought it would and within minutes, I was being marked with number 783 and given a chip around my leg. Now, I was able to go set up in transition. The whole process was making me very anxious.

When I got to transition, I was next to a man who insisted I place my stuff in front of the front wheel. He was pretty adamant about it and I just went with the flow.

The announcer kept insisting that everyone leave transition by 7 am. I only had 15 minutes to set up and put on my wetsuit (which, by the way, usually takes me a long time). I started to panic.

“Okay everyone must leave the transition area,” the announcer said.

I left and brought a bottle of First Endurance Cucumber Water with me. I forgot to bring a Gu.

Seeing Dad and some unexpected friends

As I left transition, I saw my dad. He found a bridge chair from one of the unattended booths and was sitting on it by the beach. The sun was starting to rise. The sky was breathtaking. I knew it would be a great day. As I was talking with my dad, I looked over my shoulder and saw a woman. She looked familiar. She looked at me. 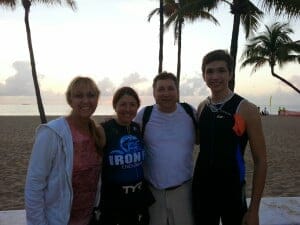 “OMG, DEBBIE I CAN’T BELIEVE I’M SEEING YOU!!!” I screamed. I was so excited. I hadn’t seen my friends Debbie and Eric Schlossman since nearly six or seven years ago! They had always been very close personal friends and my husband and I went to college with them.

“What are you doing here?” I said.

“What are you doing here?” she asked me. They had relocated to Florida several years ago. “I’m here because Ryan (her youngest son who I hadn’t seen since he was a little boy) is a triathlete. He loves it and this is his first race.”

“I’m here because I came down to help my dad with a few things and also I signed up for this tri months ago,” I told her.

The three of us picked up from where we left off years ago, as if time never stopped. It was so great to see them.

When I turned around again, I saw my brother, Ed and his wife, Andrea. “I’m so glad to see you,” I told them. They live in South Florida too. Then I saw their three sons, Max, Ben and Jacob. I was incredibly excited to see so many familiar faces, especially family members who I dearly miss.

When I do these triathlons, not that I’ve done many – only two, I never had anyone I knew other than the friends I have made by being at the sport.

Start of the race 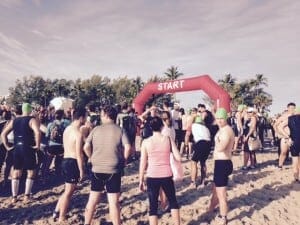 It was now 8 am. An hour went by since I left transition and I wanted to go down by the water and wait for my wave. My wave was supposed to go off at 8:23.

I started to talk with other women with a “pink” cap. I asked them if they knew what was going on. No one knew. There seemed to be no organization.

At 8:30 am, the organizers started to set up by where we were all standing. They were originally located a half a mile away for the “international” triathlon but had to break everything down and come to where the sprint people were “hanging out.”

Everyone was complaining. But they set up quickly and by 8:40 am, we were on our way.

I met a woman, Donna Silver of Boyton Beach. She was a member of the Boca Tri Club and we talked for a while. She used to live in Rockville Centre, which was close to my house.

“I typically come in last at these things,” she said. I nodded my head. “So do I.” I knew then that we would probably be friends. Once we were in the water, I lost her and didn’t see her again until the end. 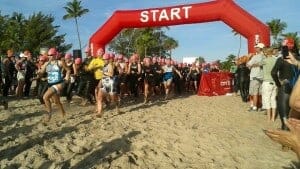 The swim was deadly for me. I don’t really know why. I started to panic. There was no rhythm, and I found it hard to swim. I felt like I just started swimming, which was only nine months ago. How do I breathe? I was hyperventilating. Holding on to the kayaks at least two times, I started to feel frustrated. Will I ever get out of the water?

I started to say to myself, “I’m almost there. I can do this.” Before I knew it, I was out of the water, one of the last ones but I was out.

I could barely run to transition. Feeling out of breath and totally exhausted, I walked in calmly put on my shoes, like my coach told me to, put on my helmet and was out with the bike.

I ran the bike out of T1 and mounted at the mounting line. I found the bike to be incredibly easy to ride and very comfortable. (It almost made me think that I have the wrong bike and the wrong seat!)

I got on easily and took off. I tried to go out hard. It was an incredibly smooth ride. I loved every minute of it. I rode through the streets of downtown Ft Lauderdale and through a park. When I was at the park, there were no arrows and I wasn’t sure if I was going in the right direction. That’s when I slowed down significantly. I didn’t know where I was and if I was going in the wrong direction. I didn’t see anyone for a long time until someone passed me on the left. That’s when I knew I was along the right path.

I left the park and tried to make up some time. Meanwhile, there were two steep bridges that we went over. I was not anticipating that. But I was easily able to make it up the hill. The ride down was incredible. I just coasted and braked when I got to a sharp turn in the road.

The bike path was gorgeous. We rode along the water and then through a lush park and back along the beach.

The volunteers and police did a great job trying to keep the cars and pedestrians off the road. I thanked them along the way.

I was told to slow it down as I approached dismount and slowly braked and unclipped. I ran into transition, racked the bike, put the helmet down, put on my Zoot running shoes and I was on my way out of transition.

The run was also beautiful, along A1A with a breathtaking view of the beach and the Atlantic Ocean. The water was turquoise blue. The only thing that made the run hard was the heat. It was in the 90’s and very humid.

I found it hard to run and I felt dehydrated. I had eaten a Gu (almost killing myself) on the bike and that helped a little but I still was very dry. At every water stop, I poured water on my head and drank as much as I could without choking from rushing. 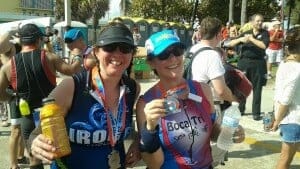 Early on in the run, I met up with Donna. She was doing the Jeff Galloway run walk method – 30 seconds on 30 seconds off. I decided to join her. My breathing was so heavy even though I had a spritz of medicine for my asthma.

The method worked and we still ran it at a decent pace. When we saw the finish line, we sprinted. It certainly made the run go faster and we got to know each other a little better, finding out that we were on the same tri group on Facebook (Women For Tri). 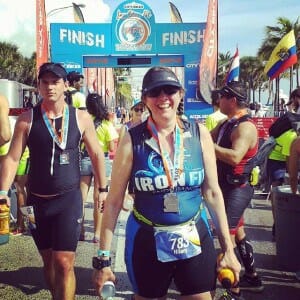 As I crossed the finish line, my sister in law was standing there. “I’m so proud of you!” she said. We hugged.

I saw my old friends, Debbie and Eric and found out that their son, Ryan, placed second in his age group! Not too shabby for a first tri!

But most importantly, I saw my dad, who kissed me and said, “I’m proud of you.” That meant everything to me… 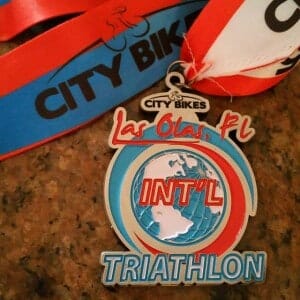 Would I do it again?  I would and even though the event got off to a shaky start, it really was well organized and a great day!