I signed up for the Maggie Fischer Memorial Swim. After not being able to swim in the pools for months and first getting into the open water in June, I opted not to do the swim. (It was later canceled because of the weather.)

But, I was on a mission to build my swim endurance anyway.

The first time in the open water was crazy. My training partner and I couldn’t swim more than 500 yards without getting winded. We had been on quarantine for months with all the pools shut down. I didn’t think it would be that hard to build back up, but it was!

We wore our wetsuits because the water was cold. I wore a long-sleeve Roka wetsuit. When the water started getting warmer, I changed the long sleeve to the no sleeve. After the second time wearing the no sleeve in early July, I dropped the wetsuit altogether. I felt like it was holding me back. So for most of the summer, I just wore a bathing suit in the open water and loved it!

When we finally got to 1-mile, I smiled. I felt like I was back to where I was last year. (If you’ve been following the blog, you know that last year, I competed in a 1-mile ocean swim in Fire Island and another one in Lido Beach. I placed in both races. This was probably because I was the “last man” swimming.)

It’s funny the things you think about when you’re swimming in the open water. Crazy thoughts go through your mind like, “do sharks come on the bayside?” or sometimes, you even hear noises like people talking when no one is around!

It’s not just the meditative swinging your arms into the water, pulling the water and breathing, it’s also random thoughts. It’s almost as if you are dreaming. 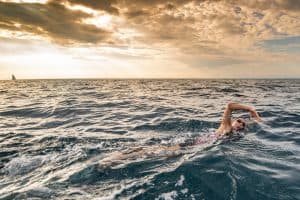 Then reality sets in and you think, “where is that buoy?” or “how far to the next rest stop?”

I try to refocus myself and count the strokes, 1, 2, 3, 4, 5, 6. I try to get to 10 but I look up after 6 and that’s a good thing. On this swim, I heard my training partner say, “Hilary, you’re going in the wrong direction!” I was. I was swimming toward the opening of the inlet which leads to the bay. I readjusted myself and swam forward.

During this 2-mile swim, I couldn’t tell how hard the current was, because it is always hard. I just don’t think about it. I try to go into a rhythmic motion and forget about life. That’s the goal anyway!

My training partner said, “that was my longest swim.” I told him it was mine as well. Swimming makes me feel alive. It gives me a sense of accomplishment. I felt as if I could have kept going. But, it was enough.

I gave him an elbow bump to show him how proud I was of both of us for this accomplishment.

I’d love to keep going and swim 3 or 4 miles. But, there’s not enough time at Tobay. The park opens at 8 am and they start ticketing without a town pass. So, for now, I’ll stick with 2 miles and enjoy my victory!