“It is not the critic who counts; not the man who points out how the strong man stumbles, or where the doer of deeds could have done them better. The credit belongs to the man who is actually in the arena, whose face is marred by dust and sweat and blood; who strives valiantly; who errs, who comes short again and again, because there is no effort without error and shortcoming; but who does actually strive to do the deeds; who knows great enthusiasms, the great devotions; who spends himself in a worthy cause; who at the best knows in the end the triumph of high achievement, and who at the worst, if he fails, at least fails while daring greatly, so that his place shall never be with those cold and timid souls who neither know victory nor defeat” – Teddy Roosevelt

“You can’t always get what you want, but if you try sometimes, you might find you get what you need” – Rolling Stones

“I don’t know why you are upset. You are too hard on yourself – you did it! I didn’t think you would finish the swim! I love you – that is all that matters. Now bring your ass home” – My husband

IMMD is a race that was an enigma. What was canceled, then rescheduled for two weeks later, was only the beginning of quite a winding road of weird communication and last minute adjustments.

We all know what was to occur October 3 was rescheduled until October 17 – after several days of uncertainty. Ironman has never rescheduled a race before- courses are shortened or races are canceled, that’s it. This has not happened before. The extra taper time really messed with many athletes minds and schedules, including mine.

Pre-race – All the regular things – travel, accommodations, athlete check in, briefing, etc all went well. I traveled down with ah teammate who was also racing, and roomed with her. I was also with her for her first Ironman last year, so it seemed fitting that she would be here with me for mine. I had some “nerves” but not too many. Not too many …until we were informed of how cold it would actually be on race day – “bundle up!” They said. Geez. I had to go thru all of my clothes again – and buy some new ones – the day before the race to make sure I would be warm enough.

Race morning was fine. Pretty cold, yes. Slept a few hours the night before, and ate pretty well considering it was four am. Two other teammates of ours came down to sherpa for us, and basically saved our lives with the logistics. They got us to the race site with my teammate about 5:30 or so, and we added essentials to our transition bags, pumped our bike tires, assaulted the porta potties, and lined up for the swim start and waited.

Apparently, there was a small craft advisory so they delayed the swim start and shortened the course due to adverse conditions….so what was to be a 2.4 mile swim was shortened to 3000 meters. Additionally, they weren’t allowing a warm up swim at all. wow. Ugh. 7:30 came, and after a few confusing announcements about the course (one loop? two loops? how many meters?) we were off. 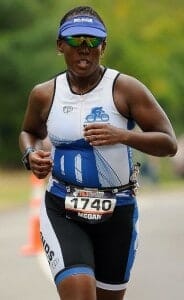 WOW! The water was cold – not frigid- and by the first buoy I couldn’t catch my breath, ok – I am used to that. Lengthen stroke, slow down, breathe. I still cant breathe. No matter how deeply I drew in air, I couldn’t get air in my lungs. OMG! my first panic atttack. EVER. Fun – as I am getting slugged upside the head and my feet being pulled at. Stop. Catch your breath, a few strokes. Stop. a few strokes. Bu the time I reached the long end of the second turn, I was fine and then the swim was great. Some chop-which I actually like as we have practiced in that every week – I zoomed around to the third turn – a few people were bobbing as they weren’t sure if we had one loop or two! after the first turn of the second loop, I got caught in a “pod” of men. one on either side, and one right behind me as he kept reminding by hitting my feet every few strokes, I couldn’t shake them, so stayed in a nice quick clip with them until I finally noticed dude on my left had peeled off – I also noticed that along with seeing the guy to my right constantly, I was seeing a Kayak. hmmmm, what? I sighted way up and saw that I was way right of the bouys – damn. Damn! But I am feeling the swim.. loving the swim – so I sprinted back on course and then settled in to finish the third turn and come in in to the finish. I swam as long as I could until it got too shallow and we all had to walk it in – which I hate cuz you lose so much time doing that.

Running into transition, my feet and hands suddenly felt numb. I couldn’t stop shaking, It took me forever to get dressed as I couldn’t feel my feet or hands too well, and there were no volunteers anywhere near to help me. I finally got my act together and got on the bike- happy to be moving again as I I knew it would help me warm up. Within the first mile it looked like whoever was left in transition passed me, and dropped my nutrition and had to turn back to get it. No problem. My plan was to take it easy on the first loop, and bring it in on the second as I knew I would need all the time I could get for the run.

10, 20, 30 40, – not too bad. It was cold though, and a steady headwind had my nose running. I was so happy to get to mile 50 -something and the bike special needs as I suddenly noticed that my traps were aching – I was fighting to keep my wheel steady from the wind gusts and it was starting to take its toll.

My nutrition was on point. I finished my first bottle of Ucan within the first half, and started working on my second. I had my base salts and was drinking regularly. I also had my rice balls that kept my energy steady and my stomach was fine.

Mile 50 -60 – 70 – Oh, My. God. The winds! at some points it was all I could do to keep moving forward. My nose is just a faucet. I stop to use the bathroom and just blow my nose! very, very disrespectful wind.

80 – 90 – 100 – those 10 mile increments were hard won. I see my teammate somewhere in there and I ask her if she is ok- she tells me to go ahead but cramping has settled in with her- indeed many people on the bike – as the constant fight against the CONSTANT wind was taking its toll on everyone.

While it was hard, it wasn’t impossible. I picked off so many people in those miles- I was able to surge well even in the wind at several points, and able to keep moving forward and not lose any of those gains. The only person I leap frogged with wasn’t even a guy – it was a woman who had a Frog Legs kit on – if there was a fun part of the bike, it was leap frogging with her! we were yelling random stuff at each other – it was so windy who knows what it was – but she was good and I hope she did well in the race!

FINALLY get to the end- I put it in granny gear for the last two miles or so to spin my legs out. I could hear my sherpas screaming at the dismount line, they were probably just as surprised as I was that I finished the bike LOL. Got thru transition, and just as I was about to leave my teammate came through, We started the run together!

Run – wow. By now it is late in the day and the sun is starting to get ready to make her departure. The wind is just not quitting at ALL and the temp is dropping, as the miles wear on, it feels like it is in the lower 40’s upper 30’s withe the windchill. The run course is a bunch of loops that take you past the finish line several times. Ugh. You get to hear them announcing finishers while you are suffering through your marathon!

We started with a steady run-walk, which worked pretty well. We were told that the cutoff was moved to 12:30; and we knew we had plenty of time based on when we finished the bike. The wind.The cold. The wind. The cold. It was brutal. Thank goodness there was warm chicken broth at each aid station, which I took each and every time. It hurt when I took a deep breath, usually a precursor to a pretty bad chest cold.

The hamstring was actually behaving pretty well. I can’t complain about that. The IT band on my right leg however? that was a different story. By mile 18 or so the run-walk turned into a speed walk. At some point along the course, a race official asked for our numbers and said we made the run cutoff. Thank goodness. we keep moving forward. At one point around mile 20 or 21, I try a few times to do a light jog. Oh – so THERE is my hamstring! It woke right up and said ” who are you kidding? keep walking.” MY IT agreed. OK – so we are race walking again.

Mile 25- my teammate says are you ready to become an Ironman? I smile through the delirium and say something, I don’t know what. A minute or so later we hear the race announcer say over the loudspeaker at the finish line that there are 8 minutes left.

My teammate looks at me and says “oh shit!” and starts running. I know I am done. I can’t run! Our sherpa on the sidewalk yells “Megan, just follow me. Yo have to do this . Just watch my sexy butt and follow me. when we get to the end of the block, another volunteer says “Oh no you have to do this” and starts running with me too. Run, walk. I just don’t want to fall down! About two blocks away, I hear them announce my teammates name as she crosses the finish line. Great – at least she got it done. I start to walk again. my other teammate screams – ok, well now you get to finish how you want to.. You still need to get this done. I am sure I stared at her like a donkey, I am just a swirl of emotions and exhaustion and COLD. I don’t care. It’s over.

Out of the gloom, a race official comes up, and says you have another athlete? My teammate says yes, she has to finish! The man says well, come on! I will get her through the chute. I start running again – he is running with me – he says are you okay? I say yeah, I’m just so cold! He says then bring it home. I hear them announce “We have one more athlete coming – They are talking about me! And then I hear the announcer say where I am from, and my name, and those golden words “Megan White – YOU ARE AN IRONMAN!

My teammate hadn’t moved from where she was once she crossed the line. She was waiting for me along with the volunteers who gave me my medal and my warming sheet.  My teammate was so cold. Volunteers took her to the medical tent to warm up. Did I say the wind and cold were brutal?? While waiting for her, our sherpas checked online and saw my time and ranking. 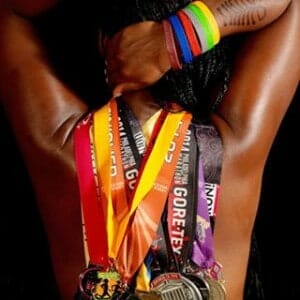