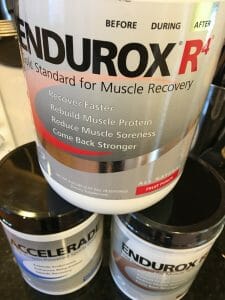 Jeff Galloway, my running coach and former US Olympic athlete, is a huge fan of the Accelerade and Endurox R4 products. I had never heard of them. I knew of dozens of other companies that I thought did similar things but when Jeff mentioned these products to me, I wanted to check them out.

Turns out my coach, Danielle Sullivan, also used them for a while when she was a professional triathlete. This made me more interested.

I bought the Endurox R4 in orange flavor for after the workout. I realized that although I didn’t love the taste at first, it wasn’t bad and I grew to enjoy it. The thing that I really liked was that it was high in protein and used the 4:1 carb/protein formula. It definitely perked me up and my recovery was significantly faster.

Since I liked the Endurox r4, I tried the Accel Gels and found that they too gave me a little pick me up before and during the training and/or the race. I particularly liked the chocolate flavor. It tasted like chocolate pudding. Yummy!

Then I tried the Accelerade product for hydration during the workout or race. This too used the 4:1 carb/protein formula (just as the other products) and I found that I could go longer and had more energy than some of the other products I tried. 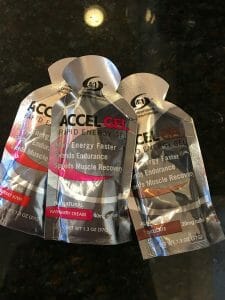 Interestingly, according to the website, “more than 10 peer-reviewed studies have shown that, compared to a conventional sports drink, Accelerade:”

Each one comes in different flavors. The Accelerade comes in orange and mixed berry. The price: $14.94

The Accel Gel Energy Gels comes in chocolate, orange, keylime, raspberry, strawberry kiwi and vanilla. The price is $3.49 each.

According to their website, “Compared to GU, researchers found that cyclists had: 13% more endurance and 50% less muscle damage.”

Athletes find that Accel Gel is: “Smooth and easier to swallow than GU Gel,” “Really easy to get down,” and
“Not super thick like other gels.” I can attest to all three of these statements. I was really quite impressed. I didn’t expect it to be like this!

I was very impressed with the product and would recommend it to anyone who needs a little more than the carbs you get from many of the competing sites.