I ask my running and triathlon friends all the time, “is it worth it?” And, I find that many of my friends ask me the same question. I had the opportunity to attend the Color Run in Queens on 5/23 and let me tell you, this one was worth it! 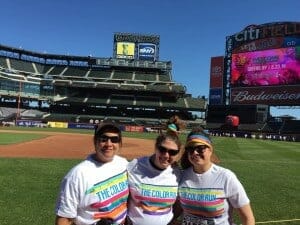 I will confess I was selected to be a blog ambassador for the Color Run but I can honestly say, this event was the coolest ever. (I will also tell you that I ran the Color Run in the Meadowlands last year with my daughter and the event was pretty bad.  I didn’t want to do it again.  But I’m glad I did. My opinion about the run took a 180 degree turn!)

Why was it so much fun? 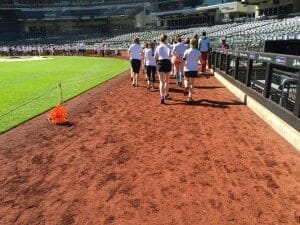 For starters, it was held at Citifield. We started the run inside the stadium. We went down a ramp and landed in the loading dock where we were brought to the actual field where the Mets play! We then proceeded to run around the field, stopping frequently to take photos of the home plate, the dug out and the big Color Run sign flashing in the stadium. It was awesome!  When do you ever get that experience? 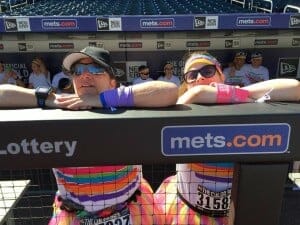 Once we left the inside of the stadium, the rest of the run was outside in the parking lot. We went through a series of colors – first pink, then orange, then yellow and then blue. The last area was sparkles, which got all over everything!

The finish line ended at 2.99 instead of 3.1 but that was okay. It felt short to me, but it was fun running through the color areas, a little hard to breath, but fun non the less!

The Color Run isn’t really a run. It’s more of a walk. There were a few people running but most of the people were walking. I even saw a “grandma” in a wheelchair going through the color!  She was covered in color. It was an interesting site. 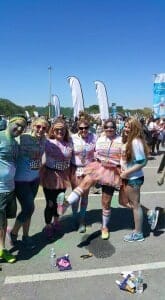 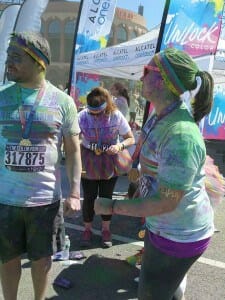 I wanted to run. So I had to dodge in and out of people. I had to ask people to get over when I passed them on the left and at times, I didn’t have a choice but to walk. That was a little frustrating to me. I thought it was supposed to be a run?

I also wished the charity, Back on My Feet, had a little more exposure during the run. But, the Color Run organizers tried to make it more of a party and celebration than a charity fund raiser.

And a party it was. There was a DJ, dancers and everyone was just having a great time! At the end of the run, everyone was throwing more color at everyone. If I wasn’t covered in colored powder during the race, at the after party I was completely covered.

We got dirty, we laughed, got fresh air and exercise! What more could you ask for?