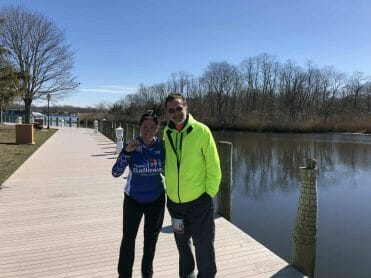 I’ve wanted to run the Riverhead Rocks 10Miler Race since it’s inception a year ago. I had heard it was a great race so I proposed it to Team Galloway Long Island. Unfortunately, most of the members had a prior commitment so, it was only Ray and me who represented the group.

We drove to Riverhead from Nassau County and got to the event site after circling around a bit. Christa from my Iron Fit Endurance team texted me. “I just got here, let me know when you are here.”

I texted her that we were lost and she provided us with the right address for the gps.

When we got to the starting line, we easily parked the car and got our numbers and swag. EventPowerLI always has cool tee-shirts and swag!

We had about an hour before race started and since it was cold with dry air gusting around us, we decided to sit in the car and wait it out.

When the race started

At 8:45 am, Ray and I headed over to the start line. I saw Christa and we chatted for a moment. Vicki Ventura, the EventPower race director talked about the course. She told the group that she ran it earlier and there was no ice. (I love that about her and about the group. They look into every detail so that the runners stay safe.)

When Terry called the time, the runners were off. I stayed in the back. There were only 179 runners and as we took off, I found myself dead last with a police vehicle behind me. I intentionally wanted to start out slow and have a negative split at the end. But, I was having crazy thoughts in my head. It’s not easy to be in last place with a police vehicle behind you. I was feeling like I was being judged. Thoughts like, I shouldn’t be out here and maybe I should turn around and go back to the start line filled my head. But I knew I needed to run 10 miles and figured I would enjoy the course. “So what if I finish last,” I thought. “I’m out here. It’s gorgeous out and I’m going to conquer Riverhead Rocks! I’m going to enjoy every moment that I’m running this!”

And with that, I didn’t turn back.

The first two miles were on the road. There were some cars but not too many. As we got to mile 2, I slowly crept myself up passed a couple of people. We entered the park. It was all trails in the park and we ran passed a gorgeous body of water. (Wildwood lakes? I thought.) The trail running was fantastic. I felt like I needed to be very conscience of not falling. There were lots of twigs and mud in places. But, it was fine with me. I stayed at a steady pace of 30/15. I felt strong and was enjoying every moment of this run. (I consciously decided not to look back. I didn’t want to know who was behind me. I didn’t care. I just wanted to move forward.) 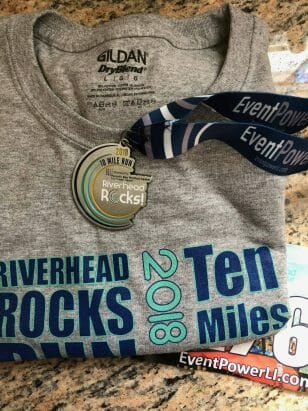 At one point, I felt like I was lost. I saw mile 8 sign but I knew I was only at mile 4. I confirmed that I was doing the right thing as I kept passing John Graziano of the Wildwood Warriors. He was volunteering on the course. He’s one of those incredibly positive people who has awesome energy and was cheering everyone on!

Although I felt that way, the course was amazingly well-marked.

With so few people on the course, at times, I felt alone. I got into my own space and just kept run/walking. Unfortunately, my headphones weren’t working so I didn’t listen to music, I just listened to the sounds of my feet hitting the trail and the wind blowing through the trees.

Fast Athletes on the Course

There were some fast people on this course, but, I didn’t let my ego get to me. I wouldn’t allow myself to feel bad that I was going so slow next to everyone else. I just held steady.

I knew that the last time I ran a 10miler was in The Bronx. I finished that race at 2:15, so I knew it would be cutting it close.

We were out of the park at mile 8 and then two miles to the finishing line. I ran up and down hills in Riverhead and then a downhill to the finishers shoot. As I crossed the finishing line, I heard Terry make his announcement, congratulating me on finishing and I looked at my watch. I PR’d this event by more than 4 minutes at 2:10:40!

I got my medal, grabbed a water from the bucket and saw Nigel, one of my swim coaches. He congratulated me on the run. It was great to see him.

Although I was one of the last finishers, I didn’t care. I was happy with my time and my achievement. What a great race and a great course. I look forward to trying it out next year and PR’ing by another 4 minutes!