Since my knee surgery, I haven’t been running as much as I would have liked to. So instead of doing the full Olympic at the Eventpower LI Mighty Hamptons, I decided to drop down to the Aquabike. It was the same distance as the triathlon, but it eliminated the run.

I asked Ray Cushmore, my training partner if we could ride to the Hamptons together since I really didn’t want to ride out there alone. Ray had a goal as well. He also wanted to PR his race. We left Nassau County at 4 am and headed out to the race site. We got there at 5:30 am just in time to set up transition and go for a short swim to warm up.

After we got out, we lined up by the beach. The elite wave went in first followed by all the other waves. My wave was the blue caps. I saw my friend Sharon Levy and Catherine Clemens and we talked for a bit before it was our turn to get in the water.

All of the blue caps went in the water at exactly 7 am. We treaded water for a bit before the gun went off. As soon as we started swimming, someone kicked me so hard in the crotch. OUCH!

But I started not to feel the pain once I got going. I was in my happy place gliding through the water. I didn’t care if anyone was around me or not, I just loved the cool water as it circulated around my body.

The buoys were great. They came up every 100 – 200 yards so it was easy to spot. The water had a little chop but it was very doable. As soon as I got to the two triangle buoys at the end, I turned around. I never stopped. I just kept swimming and it felt so good.

At one point the volunteers retrieved the last two triangle buoys and I started to panic a little. “Could I be the last one out here?” I thought. I pushed that thought out of my head. I tried to stay in the moment and just enjoy the experience.

When I noticed the last two triangle buoys after several round orange ones, I was excited to exit the water.

T1 was a little slower. I’m not sure why but I didn’t run into transition because of the rocks on the ground. So that may have caused me to be slower than in 2019.

I had been practicing at SUNY Old Westbury to gear up for this bike. Danielle Sullivan, my coach, took me and another woman, Nina, out for a ride there and she helped us with the gears and taught us how to climb. It had been a long while since I climbed any hills so I was grateful that she re-taught us how to do it prior to the race.

At the Mighty Hamptons Aquabike, I wasn’t nervous. I actually felt good on the bike. I was breathing very heavily and the hills were brutal. Just when I thought it was over, there was another hill. Even the flats seemed like they had an incline. My heart was racing and I couldn’t talk.

Racers would pass me and say something but I couldn’t answer. I was all out of breath.

The beginning of the race has the most hills. But I would say that throughout the entire 23-mile course it is plenty hilly. The other thing about the course is that it’s open. So there were lots of cars on the route.

At one point when I was making a sharp turn a car cut me off to speed passed me. I shouted out, “Are you f-ing kidding?” And, the police officer who was standing right there, said, “yup, we get one of these every year.”

The cars were speeding passed us. (I just don’t understand some people, especially since they all knew there was a race in progress.)

Anyway back to the hills, I never got off my bike. I rode up and down and felt good. It was hard, very hard but I was able to do it with ease.

I thought about what Danielle said, “keep changing gears.” I did that and it felt great. The only issues were my butt and my hands. My butt was killing me. I wish I could stand on the bike, but I can’t, not yet anyway. My hands were numb. At this point, I only had about three miles to go.

I pushed it and finished strong. When I dismounted, I screamed in pain. The volunteer looked at me, “my butt, my butt…” was all I could say. It sounded like “Tattoo, Tattoo” from Fantasy Island.

I ran in, clomping with my bike shoes. I got to transition, quickly put on my sneakers, and headed to the finish line.

“Hilary, you’re still wearing your helmet,” Vicki Edwards said to me. “Oh it’s okay, I just did the aquabike.”

I had to run to the opening in the finisher’s chute and then cross the line. It was so much fun I had to cross it four more times just to get that thrill… haha…

By the way, not only did I have a PR but I also had a Podium finish. I came in 3rd in the AquaBike division (and yes, there were people behind me!) 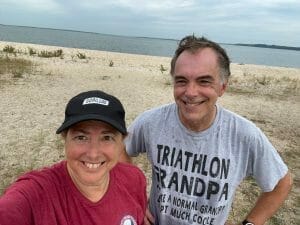