When my coach sent around an email that Roka was having a sale on the 2016 inventory, I got excited. I looked through the list and saw that the Viper Elite SwimSkin was on sale and was reasonably priced so I bought it. I had heard that SwimSkins were great for the open water, especially when you do a triathlon and wetsuits are not legal because the water temperature is too warm.

Last season, there were lots of issues with wetsuits not being legal, I wanted to check it out and see how they worked. 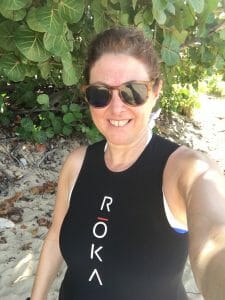 I brought the Roka Viper Elite SwimSkin with me on a recent vacation to Saint Maarten. I ended up wearing it every day! It was fantastic. Not only did it not create drag from my bathing suit, it also made me glide through the water!

Swimskins are meant for non-wetsuit legal races. They don’t offer buoyancy or help with body position but I actually felt that I had a more aerodynamic position in the water when I wore one vs not wearing one. The big thing about them is they don’t create drag. They are tight fitting and have compression throughout. I personally found the Roka Viper Elite to be very comfortable in the water and a breeze to get out of, important during T1!

According to several internet articles I read about SwimSkins, people agree that SwimSkins shave only seconds off your 100 meters, so when you’re swimming an Olympic, half or full distance race, you may want to pick one of these up to shave some time off your entire event. Even if you’re a middle to back of the packer, I would say that you would be more comfortable wearing a SwimSkin than not wearing one.

The one thing I didn’t like was the zipper in the back. I found it hard to pull up and take down because it’s a normal zipper. There was no string or material to help unzipper.

Otherwise, I’m happy I bought it and I think you will be too. It gave me the additional encouragement in open water to swim just a little bit faster and smoother than without one.

I asked former pro triathlete and age grouper, Danielle Sullivan, Head Coach at Iron Fit Endurance, what she thought of the SwimSkin, she said, “I love SwimSkins for racing!  I never get the benefit that most people do from a wetsuit, so for me, a SwimSkin is comfortable and “less drag” for swimming!”