Lately, while I ride, I get debris in my eyes. I have a decent pair of riding glasses but they don’t wrap around and protect my eyes as they should. So, I reached out to Tifosi Optics to see if they could help.

The folks at Tifosi were incredible. They showed me what I could potentially get with an RX. Since I use a bike computer, I needed an RX with progressive lenses so that I could see both close and far away. I also wanted something that had good glare resistance because when I’m riding, I want to have the clearest vision and something that didn’t fog easily.

I was sent to the website: https://www.tifosioptics.com/tifosi-rx/ where I was able to virtually try on different glasses. They had about a dozen different RX choices. They had a much larger selection if you didn’t need a prescription.

I chose the Dolomite Glasses. I loved that they wrapped around and had slightly bigger lenses than some of the other styles. They looked good on me and I thought I would look pretty “badass” riding in them.

Once the decision was made, I had the opportunity to customize the glasses with better lenses, mirrored lenses, gray or brown lenses, etc. I opted out of the mirrored lense and got a solid brown lense in a black frame. I thought that would look classic as well as badass! 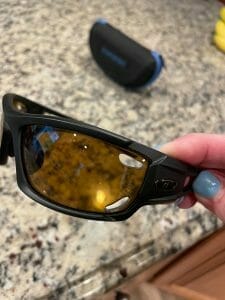 I contacted Cohen Fashion Optics where I buy most of my glasses for my RX and also to find out my pupil distance. At first, the people on the phone were hesitant to give out the information. After getting in my car and driving over there, I insisted that after spending so much money through the years with them that they better give me something that I should have. They finally agreed.

I reached back out to Trifosi Optics and they were wonderful. They worked with me with the prescription, the progressives, and the pupil distance and told me they were set.

I was shocked that only a few days later, the glasses arrived at my door. Impressed, I took them out and tried them on immediately. They were the right prescription and the progressives worked perfectly. I could read and see distance so well. They also fit so well and were so light on my face. I particularly loved the brown lenses. It added class to the glasses. I really love the way they look.

Interestingly, they have two vents on each lens allowing air to easily circulate and keep from creating drag. There are also vents on the side panels as well.

I loved the way they looked on me but I especially loved the performance. I could see well. They were light and allowed me to do what I love to do without compromise. They are definitely keepers!