I got a letter last fall inviting me to attend the USA Triathlon Age Group National Championship in Milwaukee. At first, I thought it was a joke. Really? Why would I be invited? I’m new to the sport and not fast. But I realized I got in because I won my age group in Montauk, NY. (That was the race I did for my friend who lost his leg and sadly passed away a few months later. See Racing the Montauk Sprint for A Friend.)

Thinking this was a once in a lifetime opportunity, I booked my trip and went solo to the USA Triathlon Age Group National Championship.

Before I got on the plane, I called my coach. I had just completed the NYC Triathlon and my time was around 4 hours. I was reviewing the stats and found that most of the women in my age group completed the olympic distance race (1 mile swim, 40K bike and 10K run) in under 3.30 hours. I was scared.

“That’s up to you, but it will be a great experience,” she told me.

After pondering the decision of whether or not to go, I posted a status update on the All Women’s Tri Team group page and Women for Tri Facebook page. The majority of the folks told me to go for it. “If you come in last, you still competed against the best,” many wrote.

What was I getting myself into?

I didn’t realize what I was getting myself into. I arrived in downtown Milwaukee on Thursday afternoon. I went to the expo and picked up my number. There were about a dozen or so booths including: Training Peaks, Normatic, JayBird and TriSports. 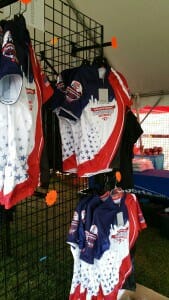 TriSports had a huge booth with branded National USA Triathlon items like cycling jerseys, t-shirts, mugs and more. They also had everything you needed for the race and for recovery! I bought a tee-shirt. (I should have bought a foam roller!)

The next day, I went to check on my bike. I had it delivered to Milwaukee from Raceday Transport. The bike was in perfect condition and I went for a little test ride to check on the gears and the new tires I had put on when I dropped it off at Sid’s Bikes NYC on 19th Street in Manhattan.

I also went for a test swim. The water was rough. There was a storm coming in and everyone who jumped in talked about how cold it was. I didn’t know if I should go in. I texted my coach. She told me I should and see if the no sleeve wetsuit worked. I was still reluctant. Then I saw Vicki Edwards, who is a local Long Island coach and friend. “Come on Hilary, we’re going in!” she said enthusiastically. (If she didn’t push me, I don’t know if I would have gone in!)

I went down the ladder and jumped in. (Hey, if I could jump in the Hudson River, I could do anything. Right?) It was a shock to my body. My feet, arms and hands were numb. I swam. At first, I didn’t want to put my face in but I forced myself. I swam some more. It was peaceful and beautiful. The water was an amazing color and was so clear. And, it was fresh water. What a treat for a Long Islander!

Back at the hotel

I went back to the hotel and got ready. I was in panic mode. I chatted for a while with my friend and running partner, Marti DiPaola. She calmed me down but it wasn’t until I got a text from my son, that really put me back on earth. “Did you know that you have a high ranking with USA Triathlon?” he texted. “Well you do and you know what, no matter what, I am so proud of you.” He made me smile. He always does. That night, I got up every hour. I asked myself, “is it time yet?”

At the race site

At 4:30 am, I jumped out of bed. My coach told me to be at transition at 6:30 am but I was just too nervous so I got there a little early. I should have listened to her. I set up my transition area but then I had so much time to kill. I sat on the grass and meditated for a while. Everyone was anxious and nervous.

One woman said, “I just hope I can beat someone.” I laughed and said, “you can beat me…”

I wasn’t concerned with beating anyone. I just wanted to enjoy the experience and do what I love to do – swim, bike, run.

When our wave was finally called, I saw my friend, Sharon Levy who owns Excel Physical Therapy and Workout. (Btw, she’s helped me a great deal especially when I had hamstring issues!). She gave me a hug and said, “we’ve got this.”

I was intimidated by these amazing athletes. It struck me most in the water. Many took off when the horn blew and I was swimming alone for a while. It wasn’t until the end, when the men caught up that I started to feel like I was in a race.

The water was freezing but after the first 100 yards, I got used to it. I felt very relaxed, maybe too relaxed. I felt myself glide through the water with my TYR Cat5 Wetsuit and loved the feeling.

I ran into transition. I could feel the adrenaline. When I stopped running I felt as if I should keep on running. (I’m not sure why I stopped.) I got to my bike and most of the bikes in my wave were already out. I didn’t let myself think about it. I just had to focus on the moment. I put on my Pearl Izumi cycling shoes and ran my bike out of transition. Did I forget something?

I mounted on the bike and road. At first, my pedals didn’t clip in and I was nervous I was going to fall. But once I got going, I clipped in and I was good.

Sharon had told me that the course was flat. FLAT? Yes, at first it was flat but at mile 2.5, there was a steep hill that went straight up. Oh boy, that was tough. The other tough part was going on the bridge. I felt as if I was on Harlem hill x2! 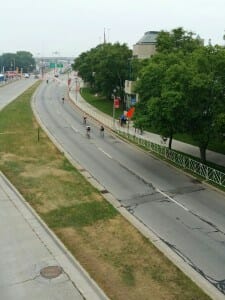 The course was pleasant. It went through three cities — suburbs of Milwaukee. There were plenty of people on the course. What struck me about the ride was every time someone passed me, they said, “keep up the good work.”

At first it was okay but after a while, it got a little annoying. If I was doing such a good job, I would be passing them, no?

Since I put my Garmin 920xt on my bike at mile 3, I messed up my triathlon setting and didn’t know how fast I was going or how many miles were left. I just kept riding. I kept pushing. Actually the more I road, the stronger I was feeling, until the end. There were some guys who passed me on the right when there was plenty of room on the left. That definitely did not make me happy.

After I got over the bridge, I asked a volunteer, “is there much more?” She told me there were two miles left. Then, I was happy!

But, my but and legs were burning. I was done with the bike. 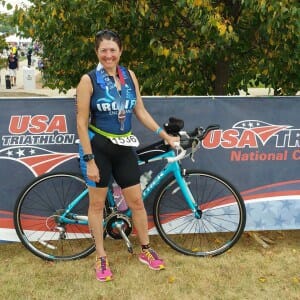 Back into transition, I put on my Pearl Izumi N3 Sneakers, my Iron Fit Endurance cap and took off. I had my watch set on a 4 minute run/1 minute walk. Maybe I could have just run and when I was tired take a walk break but I didn’t want to do that. What if my walk break was longer than a minute?

On the run, some people passed me and I passed some people. As people were passing me, they said, “good work,” which was ticking me off at that point.

Some of the spectators shouted go “Iron Fit.” And, while I was on my walk breaks, I was getting hassled by some of the runners.

The run was gorgeous though. The path ran along the water and it had breathtaking views. Unfortunately, I didn’t get to take it in but tried to move forward. During the run, my knees started to give out. I would get severe pain when I ran and then tried to walk it off. 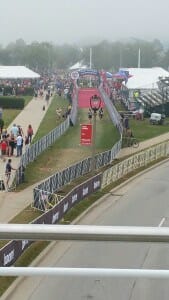 About a quarter mile from the finish line, I ran in. I picked up the pace. Not sure what the mental block was to do that throughout but I definitely had something that was stopping me from going all out the entire time. I crossed the finish line and I was so happy it was over.

It was a tough race for me, especially coming off the NYC Triathlon! But I enjoyed the experience of a longer race and I was so happy for the opportunity to compete in such a prestigious event!

Thanks USA Triathlon for including me in the race! The course was amazing. The spectators were encouraging and the staff ran a well oiled machine. The event was perfectly orchestrated.

Did I make the right decision to come out? Absolutely!  I would do it again and again. Special thanks to Danielle Sullivan, my coach, Marti DiPaola, Sharon Levy, the All Women’s Tri Team and especially to my son, Derek, and daughter, Zoey for their love and encouragement.

Here are some amazing tweets I received via text and twitter:

“Congratulations! You did it! This was a huge accomplishment. You did great!” from Marti DiPaola as I finished the race.

So impressed by my mom @hilary25 for competing in the USA Triathlon National Championship today! We’re all so proud of your accomplishments! 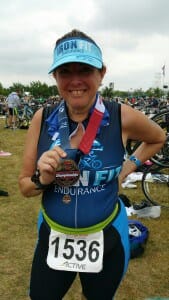