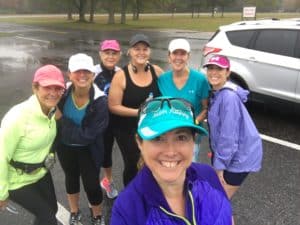 After running the NYC Marathon and having Jeff Galloway as my coach, I asked Jeff if he needed any program directors on Long Island. I knew there was a Galloway group in NYC, but I didn’t see on his website that he had one on Long Island. He was excited that I asked and, as a result, I had to go through a series of trainings, readings and tests in order to get certified to teach his method.

When I started the Team Galloway Long Island last February, I wasn’t really sure what to expect. My thinking was I wanted to give back and help people learn Jeff’s method so that they would become runners. I had way too many friends and family members looking at me like I was crazy, I needed some allies!

The majority of the people who joined the team I never met before, and I can tell you now, I feel like they are now all family! The Galloway program attracts an amazing group of people (and he’s got programs all over the world).

Every Saturday since February, we’ve been running long runs outside. We started with a 5K, then a 10K and now, we are gearing up for the Suffolk Half Marathon on October 29 on Long Island.

Today, our goal was to run 14 miles. Kerri, one of the members, had asked if we could switch the route to Heckscher Park for the day. I agreed. We met at Parking lot #4 and on my way to the park, it started to rain. “Oh, it’s not that bad,” I thought. “It will clear up.” 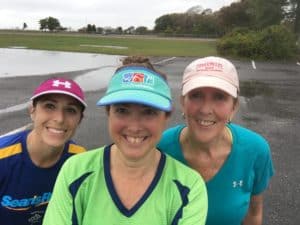 It didn’t clear. It actually down poured and we were all wearing the wrong clothing, including me. We ran anyway.

We started with seven. After the first loop, we lost two members, after the second loop, we lost more members and when we finally finished, we were down to three.

There’s something special about running in the rain with such a great group of people. I really felt like we bonded more because we experienced this together. During the run, we joked, laughed and even cried. When we stopped at the port-a-potties or the bathrooms, we found our clothing stuck to our skin, it was that wet!

I felt bad for Laura, who consistently went into puddle after puddle and Kathy who ended up having horrible blisters from the rain.

Our first lap, we noticed that JDRF was having their walk. We ran through their finish line and cheers of volunteers cheered us on. It was nice. I felt bad because we weren’t part of the walk. “I need to send them a donation,” I told the runners.

On our third lap, when there were just three people left — Colleen, Kerri and me, I crossed the finish line and the crowds were cheering. The other two women ran on the other side. I knew then, that I needed to definitely give a donation to the cause. What a supportive group!

I think as a program director, as in teaching adjunct, you obviously don’t do this for the money, you do it because you love to give back and help mentor people. Selfishly, I also do it to get myself out the door every Saturday morning to meet with an amazing group of people who are both inspiring and motivating. I’m truly blessed that Jeff Galloway let me be a program director and I’m truly blessed to have met incredible people along the way.

P.S. I did donate to JDRF on their website for the Long Island event as soon as I got home.