When my running partner, Marti DiPaola, and I saw Team for Kids had slots left for the Brooklyn Half Marathon, we jumped at the opportunity.

We had been training since January for the NYC Half Marathon in March and since this was only two months later, it seemed doable. We both signed up for the NY Road Runner Virtual Trainer program and continued our training after the NYC Half.

Prior to the race, we had problems figuring out the day of logistics. I booked a hotel room with Anthony’s Travel, the official travel agent of the New York Road Runners.  However, after learning that I would be unable to leave my car overnight in Coney Island, where the race ended, and would have to move the car at 4 am in the morning, the day of the race, we both decided it wasn’t feasible. I cancelled the room. Vinnie, Marti’s husband, offered to drive us to the race and pick us up after the race. That seemed like the best option. After canceling the room, I learned that Anthony’s Travel charged me $25 for a cancellation fee. I was furious.

Picking up the bibs

The Thursday before the race, Marti and I drove into Brooklyn to Pier 2 in downtown Brooklyn to get our numbers. It wasn’t easy to get to and parking was nearly impossible. We parked on the side of the road and walked a couple of miles to the pier. When we got there, it was a scene! There were hundreds of people. There was a band playing and New Balance, the sponsor had a huge booth were they sold funky Brooklyn clothing for the race. There, we met Michael Ann Barnes, our contact at Team for Kids and spoke with her for a while. We also finally met our virtual coach, John Honerkamp. It was great to meet him. We didn’t stay long. We were hungry and tired and didn’t want to eat from the food trucks so we picked up our numbers and we were on our way.

Day of the race

At 5:45 am on Saturday, May 16th, the day of the race, Vinnie and Marti were in front of my house. I jumped in the car and started to organize myself. I was nervous. I wasn’t able to sleep the night before. I kept dreaming of missing the race. I wore my Team for Kids piney, my New Balance Brooklyn In Training running shirt, Nike pants, green sparkly running skirt, Smart Wool Compression socks, Newton Gravity running shoes and my Team for Kids cap. I was set.

We stopped for coffee on our way. When I got back into their van, I banged my head so hard that it knocked me down to the ground. It was throbbing. I kept thinking, this is it. We’re not going to run this race now.

But I shook myself off and climbed back into the van. We were on our way. 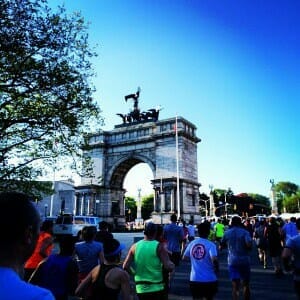 Vinnie drove us close to Grand Army Plaza, the start of the race. When he couldn’t go any further because of the police barricades, Marti and I jumped out and walked about a mile to the corral. We were in Wave 2 and our corral was far from where we got let off.

When we finally got to our corral, we waited and waited. We met some really interesting people including the “Pacer.” She was pacing at 2.30.

“Let’s try to keep up with her,” Marti said to me.

I was reluctant. We had both been running slower than an 11 minute mile and I didn’t want to go out too hard and too fast in the beginning but I said, Ok.

Once we were off, we stayed with the pacer and the group for about two miles and then I couldn’t keep the pace. Marti slowed down. “You can stay with them, if you want,” I told her. But she didn’t want to.

The beginning of the race

The first couple of miles were a little rough. The backs of my legs hurt and all I wanted to do was shake the pain away but I didn’t want to stop. Marti and I walked through the water stations and ran the rest of the time. 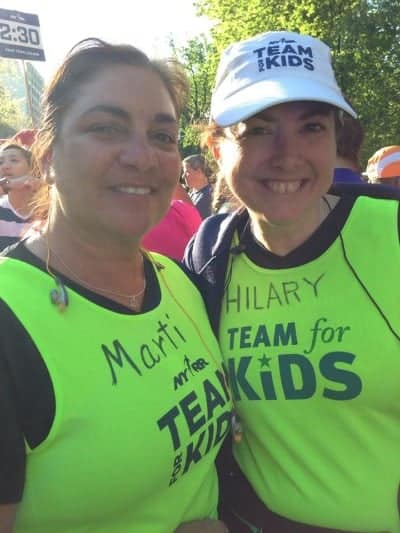 On mile 5, Marti told me her back was hurting really bad. “Do you want to stop?” I asked her. She looked at me and said, “you know me better than that. Once I start something, I have to finish!” So we continued.

The first seven miles were in and around Prospect Park. When we left the park we got a boost of energy. “Here we are Brooklyn,” I shouted. “Coney Island Here We Come!”

“I guess we’re on track since we’re not being taken off the course,” I said. We gave each other a high five.

It was exciting to leave the park and go on Ocean Parkway. We actually went down the ramp to get on the parkway. Once on the parkway, we continued to Coney Island.

At every mile, there were fluid stations. NYRR, the race coordinators, also had ample medical stations where volunteers were handing out sticks of vaseline. I was hoping for some mineral ice to put on my soar spots but they didn’t have any.

At mile 8, we saw a few of the Team for Kids folks cheering us on. We gave them a high five as we passed them.

Children in the streets

Then at mile 10, there were a group of children coming in and out of where the racers were running.  The police tried to stop them from interfering. But they didn’t listen. When a group of young boys came in front of Marti, she started to yell at them and told them to get off the trail. “GO ON THE SIDEWALK!” she said. Then she turned to me and said “sorry, it was the teacher that came out of me!” I laughed.  Her yelling definitely gave me another boost to run faster!

At mile 12, I was actually feeling pretty good. I wasn’t hurting, well maybe a little. We stopped at the fluid station, had a drink and started to run. One mile to go. In the distance, I could see Coney Island and the boardwalk. My heart was racing.  “This is it,” I said to Marti, “we’re almost there!” 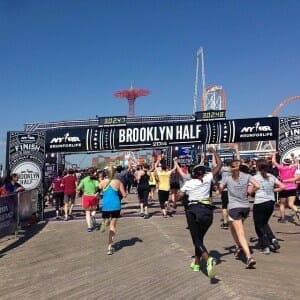 We walked for a little ways on the boardwalk to the ramp which let us out at the party. Since we were both so tired, we decided to call Vinnie for a pick up and walked back to the NY Aquarium. Interestingly, non of the cell phones were working. I wondered if the police blocked the signals for security. When we finally got through, we called him and told him where we were.

As we sat there waiting, Wendy, a woman wearing a batman uniform who we met standing in the corral walked by. “Hi,” I yelled out. She stopped. She started to tell us that she thought this was one of the worst races.

“I’m running at least 10 marathons because I’m trying to get into the 50 marathons in 50 states club,” she told us. “I’ve been to a lot of races and this one needs to be better organized.”

Marti and I didn’t say anything. We just listened. I didn’t really agree with her. I thought the corral situation was fine. I would have liked there to be some type of entertainment along the route.  By the time we got to the spots where there should have been entertainment, there was nothing. I was actually surprised. There was no music along the route at all. (There may have been music for the faster runners.) But other than that, I was happy with the run.

Turned out, both Marti and I ran the fastest half marathon we have run to date. I was thrilled I not only didn’t hit the wall at mile 12, but also had a PR (personal record). It was a great day and the coolest thing about it was, the NYRR Virtual Trainer was right on the mark with the prediction on our finishing time!