Although I always wanted to do a Rock ‘n’ Roll Marathon Series race, I never did one. So when the opportunity came up to run San Jose on October 8th, I was psyched!

The San Jose Rock ‘n’ Roll Marathon has several different races. On Saturday, October 7, there is a 5K race and then there is a KIDS ROCK (ages 2 – 12) following the 5K. How cute is that??? 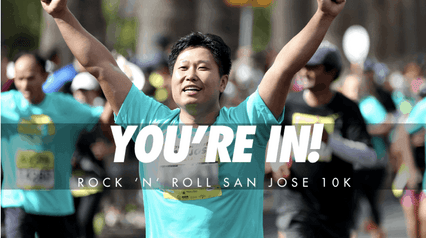 On Sunday, October 8, there is a 10K race and a half marathon. I’m going to do the 10K. (I was actually considering the half but since I have to run 14 miles the following weekend and then a half two weeks later, I thought I would save my legs!)

The race takes place in Silicon Valley, a place I have never been to. But, since my son goes to UC Berkeley, I figured an hour and a half drive wasn’t a bad thing. During the race there will be concerts and then following the race Letters to Cleo will headline the Toyota Rock ‘n’ Roll Concert Series in San Jose.

One of the coolest things about this race is that Super Bowl Champ, Roger Craig, of the San Francisco 49ers will be running this race. But, I think one of the things that I will really enjoy is the medal, which has the California bear on it! Go Bears!

The race is supposed to be fast and flat. I’m excited to try to beat my time at the 10K Ice Cream Run and have a PR. I guess only time will tell. In the meantime, I’m practicing the Galloway method and will continue to train for this amazing race.