Perseverance is what it takes to do Tri the Wildwood International Triathlon. Tri the Wildwood, located in North Wildwood, NJ, is a production of DelMoSports. The group produces a series of triathlons including the new 70.3, which will be held in Atlantic City later in the month. They are best known for Escape the Cape, where athletes actually jump off a ferry boat, 10 feet into the ocean.

So why do I say it takes perseverance?

I found this triathlon difficult. I’ve completed several up until this point and none of them are “easy.” But this one was particularly hard.

Let me start from the beginning. I had just gotten back this past week from California. My son goes to school there and all week, I’ve been struggling to get back on NY times in preparation for this race.

My husband joined me and we drove down to Wildwood. It took us five hours on a Friday afternoon to get there. The traffic was horrendous!

The night before the race, I couldn’t sleep. I was nervous. I didn’t know what to expect. All I knew was, I’m going to finish no matter what, even if I come in last. I’m going to enter that finishers shoot feeling good about my accomplishments this year.

After getting to transition at 4:45 am, when it opened, I set up quickly and started to visualize the race – getting into the water, getting on the bike, getting to the run. I didn’t know what to expect but I tried to psych myself into it. I was nervous. I was trying to “control my mind” and focus on the positive things, like how the race would make me feel during and after completion.

As I was walking toward the beach for the swim start, I met a woman from a NJ tri team. She also wore nose plugs so we started comparing notes about the good plugs and the bad ones. She said she felt bad about wearing them, but they were the only way she could breath in the water. I told her I felt the same way.

When we got to the water, we parted ways. I saw one of my teammates from Iron Fit Endurance, Will Vultaggio. We hugged and wished each other luck.

I tried to stay calm and focused. I knew what needed to be done.

We entered a coral on the beach for a running start into the water. Men went first. They started about 15 minutes later than originally planned because Stephen del Monte was working with volunteers to get cars off the bike course.

The men ran about a half mile on the beach, into the rough ocean water. As soon as the last man was at the yellow buoy, the women were queued to run. The sand was soft and got a little harder as you went toward the water. It had a silky smooth texture, almost like talcum powder.

I walked. I wasn’t going to run on that sand. I’m gearing up for the NYC Marathon and the last thing I wanted was to get injured. All 50 (if that many) women entered the water. I didn’t get in until everyone was swimming toward the first buoy. I know, it’s not supposed to be that way, but I was having trouble walking on the sand with my achilles problem.

I walked into the water. The waves were furiously breaking as I was trying to get to the yellow buoy. I started to do Tarzan (that’s when you don’t put your head in the water). I couldn’t catch my breath. The lifeguard saw me and came over. “Hold onto this until you breath normally,” he said.

I was feeling a little frustrated. Should I just quit now? Should I make it over the sprint and bow out? Why am I doing this?

I put my head in the water and got into a rhythm. I could have kept going for miles. I actually didn’t want to get out. I was really enjoying the swim. I found it so incredibly meditative. I took a few strokes, sighted, took another few strokes, sighted, and kept making my way forward. I loved the way my body bobbed up and down with the waves.

When I got to the third yellow buoy, it was time to exit. There were a lot of people struggling. They were holding on to the life guards’ surf board and buoys.

As soon as they saw me, they went for it and I found myself getting tangled with three other women who were kicking and punching me, but don’t worry, I learned, I punched and kicked back. I wasn’t going to take crap from these strangers who wanted to do better than me!

The run from the beach to the transition area was at least a quarter mile on the soft sand. Again, I walked. I tried to run, but it was very difficult.

I got to transition and I pulled off my wetsuit and put on my helmet, Pearl Izumi cycling shoes, put on my camelback, un-racked the bike and I was out. The people at the bike mounting and un-mounting station were a little intense. “Don’t get on your bike,” “Get on your bike,” “You lost your gel, WAIT.” The man handed me my gel, which I didn’t need and I was off. 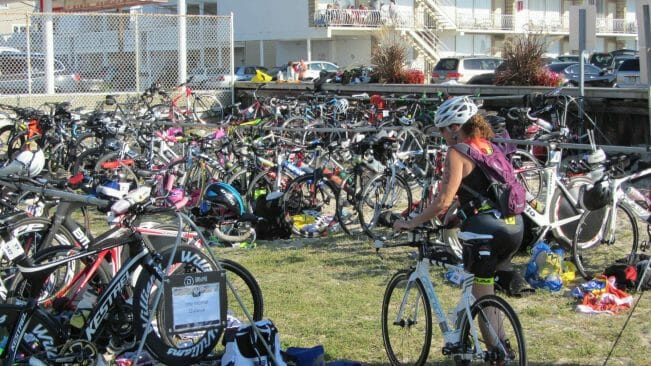 The bike course wasn’t as easy as I thought it would be. There were tons of technical turns. They were sharp at points, I thought I was going to fall off the bike. And, then there was a very, very steep bridge. I saw this bridge coming into town when my husband, Brian, and I drove in, but I didn’t think it would be on the course. And, of course it was. I didn’t go over the bridge just once, I went over it four times. (Lucky for the sprint folks, they only went over it twice!) It was steep and difficult, but I kept telling myself, it’s just a little bit further.

There were lots of folks getting off their bikes and walking. I wasn’t go to do that. I knew that was an option but I wouldn’t allow myself to get off. I kept pushing and pedaling along. Then there was the fast down hill.

I was glad the bike was over shortly thereafter because I just couldn’t do that bridge yet another time.

As I was approaching the dismount, I slowed down. The man who gave me my gel on the way out, stood in front of me. “Dismount now,” he said. I almost ran him over! I was startled. “You need to dismount before the white line, it’s the rule,” he told me. (But did he have to do it like that?)

I ran into transition. I saw Brian taking photos. He was standing there waving to me. I quickly put on my sneakers and my cap and was running to the other end of transition in the sand.

The run out was onto the beach and the beach was set back from the boardwalk. (When you stood on the boardwalk you couldn’t see the water.) The sand was soft and I thought that this is going to end soon. It didn’t. It just kept getting worse. Although for most of the 3 miles of run on the beach, the sand was packed down, there were sections where you needed to run on the soft sand. I was feeling frustrated. Lots of people were walking, but they were the sprint people and their run was barely a mile on the beach.

Once I passed the sprint exit, I continued. I saw a half dozen people going in the opposite direction from the direction I was going. I thought about bowing out at that point. (Maybe I should just turn around with them? But I didn’t.) I kept going to the end where the turn around was on the soft sand and a ton of young children asked me if they could throw water at me. I said, “ummm, no thank you.” I took their water and dumped it on my head instead.

“You’re doing great,” the adult volunteers were saying to me. I knew at that point that I must be the last person because there was no one behind me. “I feel like I’m the only one on the course,” I said. They laughed and said, “yes, we created the event just for you.” I smiled.

I couldn’t run what I had anticipated I could run. I started with 30/15 Galloway Method and couldn’t do that so I dropped it to a 15/15. That was much more doable in the sand. And, even when I finally got to the boardwalk in the extreme heat, I found that the 15/15 worked best. It put me at a 14.40 minute/mile but I didn’t care. I was exhausted from running on the sand.

On the boardwalk, I went through two piers that had amusement rides on them. That was different. It made it more enjoyable. At the point that I was running on the boardwalk, there were tons of people on the course. One of the volunteers apologized to me. “We just couldn’t keep it clear,” he said. “I’m really sorry.”

I couldn’t talk, so I just smiled.

The volunteers were very encouraging even though I knew I was the last person to finish the International distance. There were about a dozen or so people behind me who were doing the sprint but that didn’t make me feel any better. I appreciated the volunteers’ enthusiasm.

Although I always thought that the world would end and I would never do another triathlon again if I came in dead last. I came in last in the International division. And, the world didn’t cave in, no one cared (or if they did, I don’t really care about them either!) and I finished the race, which was one of the hardest I’ve ever done.

I got a text from my daughter that read:

“You did it and I’m proud of you. You did amazing no matter how fast you finished.”

And from my son: “You finished it!” I also got a text message from my sister, my coach and from my brother, all congratulating me.

And you know what, I’m proud of myself. This was a PR for me for an International (which was about a mile swim, 18 mile bike and 5 mile run).

I could have backed out at least three times during this race that took me 3 hours to complete and yet, I kept telling myself, I need to cross the finish line no matter what. And that’s exactly what I did. 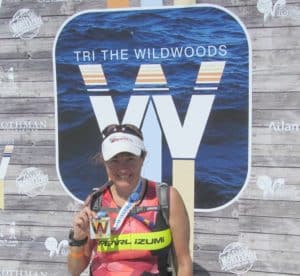 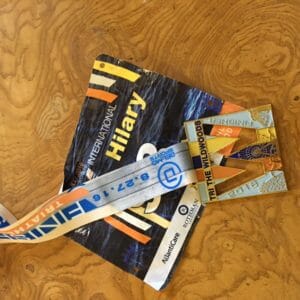