There’s a real stigma to wearing nose clips while swimming and I’m not sure why. I’ve been seeing more and more swimmers, and even pros, in both the pool and open water wearing them. I remember when I wore them for the first time, I felt so self-conscience. But as I’ve been wearing them, I could care less what other people think. I know they work and help prevent water from going up my nose and into my sinuses.

Some say that Nose Clips are Just for Beginners

That may be true to an extent. When I first started, the water was going up my nose and I was choking on it. Therefore, my swim coach insisted I use them. After that, I was able to swim with no problem.

In recent years, there has been a ton of research found that nose plugs are beneficial because:

A Note From a Reader 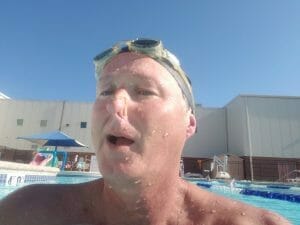 One of my followers reached out after my article about Strange things Happen at the Pool. He said:

I have had swimmers ask me that same thing. Some lap swimmers wear nose clips because they do get water up their nose but many also wear them because the pool chemicals bother their sinuses, which is the case with me.

The days when people used to say swimmers should never wear nose clips are long gone.

Many competitive college and high school swimmers now wear them not only for the backstroke but for all strokes – check out the University of Wisconsin.

This is because wearing a nose clip has proven to give swimmers with strong underwater leg kicks an advantage on all underwater turns off the wall.

I encourage swimmers to use or wear anything that makes them feel most comfortable in the water. So when ignorant people like the woman you encountered at the pool make stupid comments like that just ignore them for what they are, just plain ignorant,”

If you want to wear nose plugs, wear them. If they make you feel physically better and it helps to alleviate the sinus problems, then who cares how they look. We all look silly in the pool and in the open water between the bathing cap, goggles, wetsuits, booties, and sometimes even gloves. It’s not a beauty pageant. If it makes you efficient and you swim better, use it and keep on swimming!

P.S. Thanks Mike for contributing!