Does anyone like hills? I’m sure there are people out there who like them but I’m not a huge fan. I don’t mind them. I will push through them but they really aren’t my issue.  My issue on the bike – starting out. I clip in and I stand there. I just can’t seem to clip in and go. I clip in and stand there…

My friend and tri/running buddy, Laura, told me that she would ride Old Westbury with me. Old Westbury is a school on the northshore of Long Island. It is hilly, very hilly. There is a road that runs around the school and it has dramatic uphills and downhills. It’s set in a country background.

Laura and I met up. We went once around the course. My heart must have been pounding through my head and out my ears. It was tough. During the first loop, she said, “let’s take a detour and see the horses.” 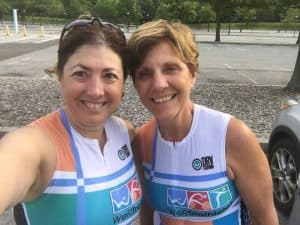 I followed her down a long road, which was a retrieve from the hills, and we saw some beautiful scenery, including a man riding a horse with three other horses following. I only wished I had stopped to take a photo, but the bugs were all over me. They were flying in my eyes and in my ears while I was riding and especially when I stood still.

I didn’t mind the flies and the bugs (I did but I didn’t). I just tried to focus on the gorgeous backdrop. The grass was so green and the brown horses trotting around just put a big smile on my face. (I just tried to keep my mouth closed in fear that the bugs would fly in.)

We went further and then circled back to the course. “Let’s stop at my car for a drink,” Laura said.

I was delighted. Maybe we can stop now?

We went back to the cars, she took a sip and said, “come on Hilary, let’s do it one more time.”

I didn’t want to, but I did. It was fine. It was actually fun. I enjoyed it. I struggled a bit but still enjoyed it.

When we went back to the car after the second loop, she said I should go around again while she run. But after checking my emails and thinking about all the work I had in the office, I thought better of it and just packed up the car and went home.

It was a great ride and I’m glad I did it with Laura because if I were to do it alone, I probably would have found an excuse.